AWS is clearly the best of breed, IaaS and PaaS provider. It will be the main business driver of profits and growth for Amazon, and will capture [one would guess], more than 50% of the large corporate market, which will offload, part, all, or some hybrid variation, of corporate computing to an external Cloud platform. AWS is simply one of the best firms on the planet and is constantly producing new and better technologies around PaaS and IaaS.

Why and How AWS ?

How was AWS able to achieve this dominance in Cloud outsourcing ? First and most obvious, it should be remembered that Amazon has its own established “iteration” (SaaS application) of its infrastructure service that took over a decade to refine before the launch of AWS; namely Amazon.com, the world's largest and most complicated multi-instanced SaaS application. Amazon's retail business provided the perfect test case for a robust infrastructure.

This means that AWS started from SaaS and worked its way down the stack. This is unlike Google Cloud or Microsoft Azure which went bottoms up. This fact gives AWS an enormous advantage.

The leverage issue results in the second development. The basis of the AWS business model is to market the spare processing capacity that the e-commerce business would not utilize at off-peak periods which would only burden the company’s profits. 15 years of experience in doing this has provided a real barrier entry for AWS.

Hosting center design expertise, network and infrastructure knowledge, along with 250.000 or more developers who program to the AWS platform[s], means a plethora of innovation encased in best of breed practices.This business model allows AWS a lead in technology and in scale economies, which also allows it to implement price reductions to steal market share, putting more pressure on Google and Microsoft.

The third and the most impressive fact of AWS' success is the speed at which AWS migrated from serving mostly cloud-based startups and small businesses in 2007 and 2008; to massive organizations across the globe, a mere few years later including;  the CIA, Netflix, Unilever, Nordstrom, Qantas, Pfizer, Kellogg’s, J&J, and Comcast. Economies of scale, reliability, a global infrastructure, high performance, ease of use and multi-level security have all combined to entice larger organizations into putting some of their key processes into a private or hybrid cloud model.

AWS has basically forced all firms to consider the 'subscription' model as a part of their IT operations. Remote workers, sales and field forces, management and their reporting, client-centric 360 degree CRM views, can all benefit from lying on top of a secure, available and redundant state of the art architecture. There is little need for firms to employ server specialists, hardware customization experts, or network admin staff.

Firms will have to undergo a cultural change. Developers will become responsible for IT operations [DevOps]. Network admin will become Cloud architects. CTOs will be become drivers of business change through digital media and IT innovation. Workers will have to be connected and 'induced' to use apps that improve productivity and client facing professionalism and service.

More than any other firm, AWS has critically altered the perception and the necessity of using Cloud computing. 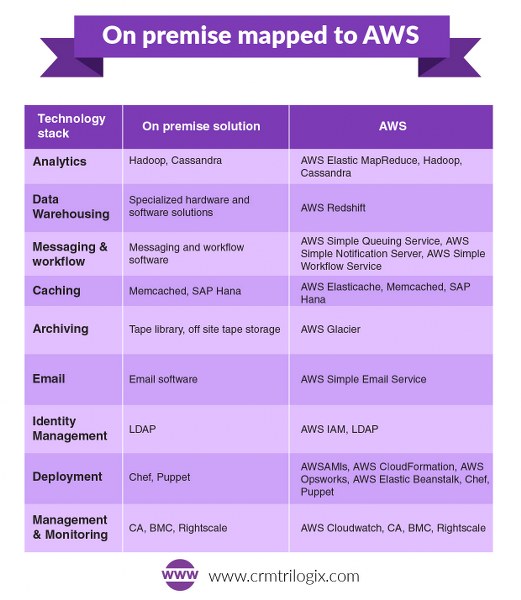