According to Forrester less than half of all enterprises use a public cloud platform right now. However, recent research by 451 Research demonstrated that it is surprisingly, the financial services industry who is a leader in adopting cloud technologies. With increasing competition brought by cloud-native disruptors in the banking arena, 60 percent of financial services companies surveyed reported that implementing cloud technology will be a business priority from next year.

A recent McKinsey survey outlined a big challenge among enterprises to completely migrate their operations to the cloud. There is a big gap between the IT leaders who have migrated over 50 percent of their workload to the cloud, compared those trailing behind with less than 5 percent.

One of the main reasons for slower cloud adoption is security. According to a study by LogicMonitor, two-thirds of IT professionals state that security is the key concern in cloud migration. In the coming years, improving security will be the key cloud industry objective.

With new solutions for compliance and data control in place, companies who haven’t moved to the cloud will have less reason not to. Indeed, solutions that answer questions around data control, compliance and user security will be the driving force behind businesses adopting cloud solutions. Solving these questions around security will be the biggest reason for the enterprises to uptake rather than compute requirements.

The complexity with Security is that most of the responsibilities rest with the customers, and more are using cloud visibility and control tools to lower chances of security failures and breaches.

Some hyped services such as Machine learning, predictive analysis and artificial intelligence may provide some improvement to security and accelerate the number of large-scale, highly distributed deployments.

However, security, is still largely a set of manual interventions centred on the OS, the network, dev-test-prod environments and the data.  These require SME skills, budgets, training and a constant cycle of upgrades and patching to avoid config drift and obsolescence.  Throw in upgrading and updating web servers, db’s, programming frameworks and code; and we have on-premise complexity simply shifted to the cloud. 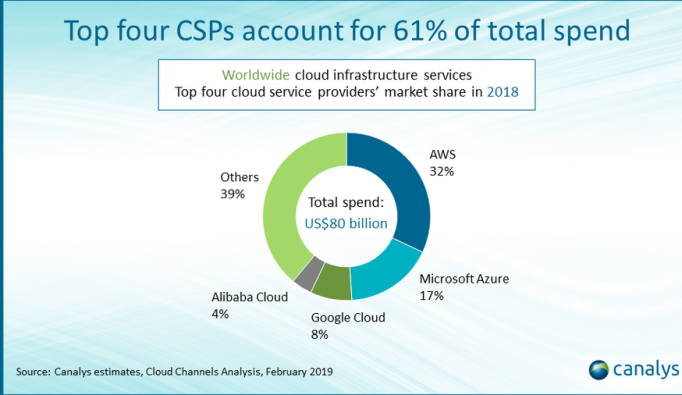 The cloud provides an ecosystem for open source to thrive. The large amount of open source DevOps tools automation and infrastructure platforms such as OpenStack and Kubernetes is supporting the growing open source adoption.

Edge computing will reimagine the cloud

Cloud computing is usually viewed as centralised data centres running thousands of physical servers. However, this perception is missing one of the biggest opportunities brought by cloud computing – distributed cloud infrastructure. As businesses require near-instant access to data and computing resources to serve customers, they are increasingly looking to edge computing.

Edge computing directs specific processes away from centralised data centres to points in the network close to users, devices and sensors. It was described by IDC as a “mesh network of microdata centres that process or store critical data locally and push all received data to a central data centre or cloud storage repository, in a footprint of less than 100 square feet”.

Edge computing is essential for the Internet of Things (IoT), as it requires to collect and process big amounts of data in real-time, with low latency level. Edge computing will help IoT systems to lower connectivity costs, by sending only the most important information to the cloud, as opposed to raw streams of sensor data. For example, a utility with sensors on field equipment can analyse and filter the data prior to sending it and taxing network and computing resources.

Edge computing is not the final stage of cloud computing, but rather a stage in its revolution that is gaining fast adoption across the industries.

2020 should see a growing adoption of containers – the technology enabling developers to manage and migrate software code to the cloud. Recent research by Forrester estimates that a third of enterprises are already testing containers for use in software development, while 451 Research forecasts that container market will reach $2.7 billion in 2020 with annual growth increasing to 40 per cent. According to a Cloud Foundry report, more than 50 per cent of organisations are already testing or using containers in development or production. For businesses using multi-cloud infrastructure, containers enable portability between AWS, Azure and Google Cloud, and adjust DevOps strategies to speed up software production.

While all these numbers are nice, Containerisation, Docker, Kubernetes, Orchestration, management and support are all very complex, requiring training, SMEs, lots of fast-fail, and of course a good business-IT reason why the application stack should be containerised (as opposed to using a VM).

“Serverless computing” is a misleading term in some sense, as applications still run on servers. However, using serverless computing, a cloud provider manages the code execution only when required and charges it only when the code is running. With this technology, businesses no longer have to worry about provisioning and maintaining servers when putting code into production.

Serverless computing gained mainstream popularity back into 2014 when AWS unveiled Lambda during its Reinvent Conference and got further traction recently as AWS announced its open source project Firecracker.  Serverless computing is predicted to be one of the biggest developments in cloud space. Still, not everyone is ready for it. Moving to serverless infrastructure requires an overhaul of traditional development and production paradigm, meaning outsourcing the entire infrastructure.

Serverless computing will not be an overnight sensation. Instead, it will be adopted and developed together with a growing amount of use cases. Current solutions usually lock customers into a specific cloud provider, but the arrival of open source solutions in this space will enable a wider portfolio of implementations or serverless computing across the industry.